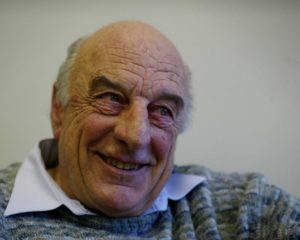 Bill played for Guernsey 9 times as wicket-keeper. He still holds the record for the number of stumpings with 8 and is 5th in the table as far as catches are concerned having taken 7. His first game was at College Field in 1953 when the high scoring match finished with Jersey just squeezing home by 2 wickets. (Guernsey 245 for 9 dec, Jersey 247 for 8).

His next game was in 1957 again at College Field. He nearly featured in what would have been a remarkable occurrence. Treagus and Pitman for Jersey had put on 63 when Treagus hit the ball to the cover boundary and they ran 5. The Press report indicates that Offen threw the ball in so hard that the wicket-keeper had to jump and just managed to stop the ball. Had he missed the ball it would have gone to the boundary for 9 runs.

In 1966 at the FB Fields he was made captain but the match ended in a draw. His last game was the year after in 1967 at College Field when another draw ensued. He was not renowned for his batting and mustered 5 runs in as many innings.

He also played for the GICC and Rovers. He became an inaugural member of the Guernsey Umpires Association.

He was a Douzaine member of the States for Torteval from 1996 until the abolition of the post in 2004, and sat with his wife Pat who was also a States member. He sat on the States Recreation Committee and as such was a keen instigator of the Leisure Centre.

It was more than 30 years ago that the idea of a leisure centre was first mooted. In 1967, Bill Robilliard President of the Guernsey Sports Council started to put pressure on States members to build a centre and Pour Beau Sejour was a common car sticker. In 1970 the Beau Sejour working committee was formed. Many St Peter Port parishoners did not want it in their back yard and others did not want to see Beau Sejour House knocked down which stood next to the tennis courts half way between the German bunker and the level playing fields at the top.

After four years of debate and two States meetings lasting 16 hours, it was finally given the go-ahead in April 1974 by 35 votes to 16. Around 90% of members wanted a centre but most objected on the grounds of cost. Deputy John de Putron thought that it would be a white elephant and others thought the size to be irresponsible. Others wanted a 50-metre Olympic swimming pool but the cost of £2m was too high. Many did not even know what a Leisure Centre looked like. Deputy Robbie Burns, President of Recreation was praised for steering it through.

Building finally started and was not without its problems. Steel girders were in short supply as they were being diverted toward North Sea Oil platform construction. The two wettest Autumns for 200 years and one of the hottest Summers in 1976. However the centre was officially opened on 11 December 1976 by the Bailiff Sir John Loveridge, watched proudly by the then President of Recreation, Tony Bran

In early March 2001, The Recreation Committee unveiled plans to spend £9 million on updating the Beau Sejour Leisure Centre. Opened 25 years ago in 1976, it is the most used public building on the island with 1,600 daily users and 600,000 annually. It also has an impressive 5,000 members.

The building looked tired and outdated in some areas and the plans included:

On 29 March 2001, the States approved the expenditure and it was hoped that work would commence this year and be complete before the Island Games in Guernsey in 2003.

In Rob Batiste’s acknowledgement to Bill in the Press on 19th January 2019 he said, “….and talking of refs, they did not come much better than Bill Robilliard, who died earlier this month. Bill’s sporting CV was quite remarkable when you consider both his skills and administrative powers in football, cricket and with the old Recreation Committee and Sports Council. That we have facilities such as Footes Lane and Beau Sejour Leisure Centre owes much to Bill’s influence. He played junior island football just after the Occupation but his refereeing was in a different league, as was his wicket-keeping in the summer months. His much-valued refereeing earned him three Muratti lines and one Upton line, long before it became the norm for a CI referee to take charge of the second biggest game in the annual CI football calendar. In terms of cricket, he was an island captain who was a fixture in the side for a decade embracing the late 50’s and early 60’s. Bill was also at the fulcrum of the great Rovers cricket teams of the 1960’s, where he bravely stood up to bowlers such as Ricky Mills, and had fantastic hand-eye coordination”.

Shaun Shackleton’s obituary of Bill on 18th February 2019 in the Evening Press: 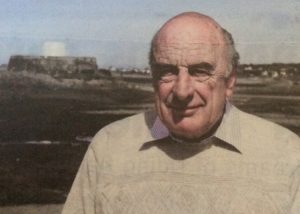 William Le Ray ‘Bill’ Robilliard was born in Guernsey on 27th January 1931 and educated at the Intermediate School for Boys. He worked for the same firm of accountants for more than 40 years, Black, Geohegan and Till, which became KPMG. He and his late wife Pat also ran a guest house in St Peter Port, before building a home in Torteval in 1969. Here Bill served in all the parochial offices: two years as the procureur of the poor in 1971-72, he was elected as constable in 1976 for three years, joined the douzaine in 1984 and served continuously until 2008 when he retired, having spent the last eight years as vice-president of the douzaine. He was also for a while the chairman of the Island Douzaine Council. He served for eight years as the douzaine representative for Torteval from 1996 to 2004 and stepped down when that office was abolished.

As well as his passion for his island home, Bill was a keen sportsman. He played in the Junior Muratti XI in 1948 and 1949. He qualified as a football referee in 1948 and was active in that role until 1981. For his long service he was presented with two awards by the Referees Association of England and Wales.

Aside from football he also played cricket competitively for Rovers A and was island wicketkeeper throughout the 1960s. Bill began his service on States committees long before he even joined the States. Beginning in 1967 as a non-States Member of the States Adult Sporting Needs Investigation Committee, he went onto the States Sports’ Committee and the States Recreation Committee continuously until 1983.

Remembering a valued member, La Societe Guernesiaise paid tribute to Bill in its journal: “On 22 April 1987, Bill was one of the 70 people who attended the first-ever meeting of the family history section of La Societe Guernesiaise, which was held at its headquarters at Candie. He became a member of the very first family history section committee, taking up the position of overseas enquiries secretary, which he held for nearly five years. In the very first Family History Section Journal, published in 1988, Bill wrote that he had successfully answered 12 enquiries. He gathered together  a small group of members who began assisting him with research on behalf of many correspondents who contacted the section. At that time the parish church records had not been microfilmed or indexed and research had to be undertaken by writing to or visiting the incumbents, or the Greffe Office at the Royal Court. He was very enthusiastic about researching his own Robilliard family history. Bill was elected a member of the Priaulx Library Council in 1999 and in 2006 he was made a trustee of the Library, a life appointment. He was the council’s vice-president from 2007 right up until his death. Always interested in island history and culture and was an enthusiastic speaker of Guernesiaise, it was a role that he very much relished. He was also involved in sports administration and was the founder president of the Guernsey Sports Council from 1967 to 1982 and also the founder president of the Guernsey Commonwealth Games Association from 1968 until 1981. He acted as commandant for the Guernsey team at the Commonweath Games on three occasions – 1970, 1974 and 1978. ‘In short, Bill devoted a huge chunk of his life to public service in the island that he loved passionately,’ said Bailiff Sir Richard Collas.”