Dave Hearse could not emphasise enough the importance of remaining focussed following Guernsey’s comfortable opening day victory in the ICC European Division Two Championship.
One could sense that the memories of two years ago, when the Sarnians eased to a seven-wicket win against Gibraltar in Glasgow but then lost the next two games, still weigh heavily on the island squad.
How coincidental that the margin of victory and the opposition were repeated yesterday.
“We have got to make sure that we are ready and raring to go again tomorrow,” Hearse said.  Admittedly the rain interruptions on day one had also prompted him into such a statement.  “We have got to be patient with the weather this week. We need to stay focussed on the task in hand.”
Perhaps it was the wintry weather at Port Soif but the Gibraltarians were caught stone cold within the opening quarter of an hour of the championship.
After Stuart Le Prevost had won the toss, both Lee Savident and Blane Queripel struck in their first over and the former Hampshire player then claimed two in his next – the visitors were 10 for four. 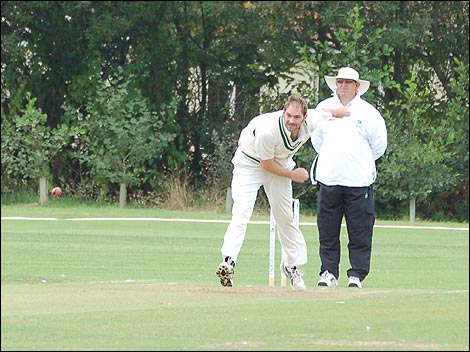 Steven Gonzales and Richard Buzaglo started to put up more of a fight before the former hit a high full toss from Queripel to mid-off where GH Smit held a well-judged catch and the Cobo paceman added his third victim in his next over, removing Rex Purnell.
Number six Buzaglo continued to show that it was possible to make runs with a bit of application while wickets kept tumbling at the other end.
Kabir Mirpuri and Iain Latin were both run out after hesitations when Guernsey fielders had made half-stops and then Jeremy Frith made his fourth catch of the innings, the first not in the slips, when he snaffled Ross Harkins at point off Jamie Nussbaumer.
When Buzaglo fell, run out by Kris Moherndl in the covers for 44, Gibraltar had been dismissed for 87 in 35 of their 50 overs.
Rain fell between the innings to delay the restart briefly but Savident and Matt Oliver saw their side through to lunch at 29 for no loss.
The big all-rounder could do nothing, though, about Gonzalez’s second ball after the resumption which cut back and bowled him through the gate.  Oliver looked in excellent touch as he drove and pulled boundaries in his 27, but could then only clip a half-volley straight to mid-wicket, much to his own disappointment.
Frith seemed out of sorts with the bat as Purnell took a smart return catch for his second wicket, although with less than 30 needed, it was not the stage on which the Cobo all-rounder thrives.
Instead, Tin Ravenscroft and GH Smit calmly put away the bad balls with aplomb to guide their side home with 34.2 overs to spare.  The 16-year-old struck four sweetly-timed boundaries in his 21 before the Rovers man sealed victory with a delightful on-drive for four, hit straight back towards his teammates in the pavilion.
“The biggest problem we face is transferring from artificial pitches to grass and I think today it was always going to be easier batting second and the toss was important, but we will not use that as an excuse – we were beaten by a stronger side,” said Gibraltar captain Christian Rocca.
“We are probably the youngest side here and our objective is to bring on those youngsters and give them experience.  Realistically we will be looking to finish somewhere in mid-table.”

The opening day of the European 2nd Division Championship in Guernsey saw Jersey, France and the hosts all record convincing victories.
At Port Soif Guernsey won the toss and sent Gibraltar in to bat. The move paid off immediately as two Gibraltar wickets went down in the opening three overs. First, Ian Farrell was very well caught at slip by Jeremy Frith off Lee Savident and then skipper Christian Rocca was bowled by Blane Queripel. Things soon became even worse for Gibraltar as Savident removed Ferrary (again well caught by Frith at slip) and Bacarese for five and nought, respectively, leaving Gibraltar tottering at 10 for four. This became 27 for six when Queripel removed Steven Gonzalez and Purnell. Richard Buzaglo the tried to rescue the innings almost single-handedly. In an innings lasting 84 balls he made a gritty 44 before being the last man out as Gibraltar finished on a total of just 87. In addition to Buzaglo, two other of the Gibraltar tail were also run out. For Guernsey, Savident finished with three for 14 from his eight overs, while Blane Queripel also captured three wickets, at a cost of 32 runs.
After a fifty minute rain delay following the innings interval, Guernsey set off in quick pursuit of their target. Savident and Matt Oliver put on 29 for the first wicket before Savident was bowled by Gonzalez. Frith then helped Oliver take the total to 55 before Oliver was caught by Ferrary off the bowling of Rex Purnell. Although Frith soon followed Oliver back tot he pavilion, Guernsey passed the Gibraltar score in just the sixteenth over to get their campaign off to an impressive start.

Guernsey hit the ground running yesterday to get their ICC European Division Two Championship campaign off to the ideal start.
Gibraltar, who had been reduced to 10 for four within the opening three overs of the competition, were defeated by seven wickets in fewer than 51 of the scheduled 100 overs at Port Soif.
“It’s a good start and we have two points on the board, which is the main thing,” said island manager Dave Hearse.  “We won it quite convincingly in the end.  We lost a couple of wickets, but the players may have been affected by the rain break and you can often lose wickets in situations when you are chasing a small total.”
Lee Savident and Blane Queripel, who claimed three wickets apiece, made the early inroads and later on Gibraltar contributed to their own downfall with three run-outs.
“It was disciplined bowling.  Lee and Blane bowled well, even though Blane drew the short straw and had to run into  a strong wind.  They took six wickets between them and that put a big dent in Gibraltar’s innings.”
Savident and Oliver got the Sarnians reply off to a sound start before Guernsey were seen home by Tim Ravenscroft and GH Smit.
Gibraltar captain Christian Rocca felt losing the toss did not help his side, but emphasised they had no complaints with the result.  “It was always going to be tough because Guernsey are one of the fancied sides in the tournament,” he said.  “Once we had lost those early wickets we were never going to come back from that.”