FULLY four hours after starting a shortened game in the FB Fields gloom, Guernsey got their promotion campaign off to the winning start they treasured – in the rain and confusion. With a margin of four wickets and five runs on the Duckworth-Lewis method, Guernsey breathed big sighs of relief. Chasing a 26-over target of 128, they were ultimately seen home by the seventh-wicket pair of Ben Ferbrache and Tom Kirk who, until the decisive rain intervention, had brought some calm to Guernsey’s chase of a moderate target. Their unbroken stand was no more than just 21 runs, but it made the difference and kept the incredibly enthusiastic Pacific Islanders at bay in the same sort of miserable conditions that had met the players when they arrived at the ground early in the morning. 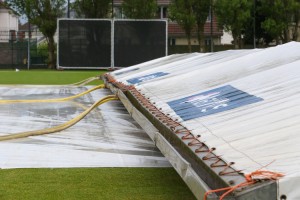 Play eventually started at 3.30pm, this after skipper Jamie Nussbaumer had won the toss and chosen to field. The Guernsey camp might happily have seen the rain keep coming down, their preference for a match of at least 40 overs per side rather than something resembling a T20 thrash. Vanuatu entrusted Jonathan Dunn and Wolford Kalworai to open their campaign, while Ollie Newey took the new ball in an XI which saw Luke Nussbaumer, Ollie Nightingale and Andrew Hutchinson miss out from the 14-man squad. Dunn took a single off the first ball with a gentle nudge to leg and by the end of the first over the Pacific Islanders had five on the board. Bowling up the slope, Matt Stokes made a quick breakthrough, getting lucky when his short ball was mishooked by Kalworai straight into the grateful hands of Dave Hooper at short mid-wicket. Stokes, uncharacteristically, then allowed new man Patrick
Matautavva a longhop to get off the mark with and, at the same time, gain the satisfaction and self-confidence of seeing his pull carry the mid-wicket boundary for six. Matautavva was clearly not planning to sit on his splice and in Stokes’ second over he smashed another short ball into the long-on fence, only to guide the next delivery, bowled short and wide of off stump, to gully where Josh
Butler threw himself to his left to take a good catch – 26 for two in four. 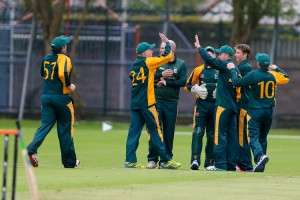 Skipper Andrew Mansale came in at four and was immediately playing more circumspectly, as was Dunn in the face of a tighter line and length from the new ball pair. Stokes, in particular, was getting the odd ball to leap off the juicy pitch and fly past the edge of the bat and through to Jason Martin. The early South Pacific flurry was soon dampened and by the end of the eighth the score had
edged up to 38, by which time the clouds were darkening again and the rain, albeit light, had returned Newey’s spell got better with each over and in the final six of his spell, a big shout for LBW was turned down by umpire Sue Redfearn and Mansale escaped on his way to a very useful 27. 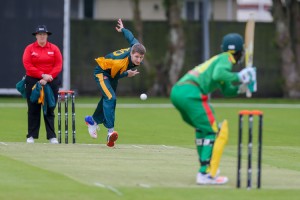 Max Ellis replaced Stokes from the St Clement golf course end for the 12th and with the run rate hovering just above four, already Vanuatu were clearly in need to push on as the Guernsey captain also introduced himself from the top end. Nussbaumer chose to come off a short run of barely 10m and as he struggled to find his rhythm Mansale drove him sweetly for four, the pace of the ball over the damp grass just eluding the flying Hooper on the cover boundary. The weather remained as uncertain as some of the strokes which flashed by the outside edge of the third-wicket pair’s blades and by the end of the 14th the score had risen to 70 with the stand an increasingly troublesome one for the Greens. It was worth 61 when Mansale drove at a full, wide-ish ball from Hooper and the faintest of edges was superbly taken by Martin standing up to the stumps. Dunn hung around until the 23rd over when he tried to get a full Nussbaumer delivery through the onside and spooned the ball back to the bowler who took a neat one-handed catch. But the catch that out-stripped any in this game and may rank as one of the best of the entire tournament came soon after, as Butler snapped up new arrival Atari with a quite superb running boundary take. The innings needed impetus and the talented all-rounder Nipiko threatened it as he smashed Tom Kirk’s off-spin out of the ground and nearly onto the golf course, but a couple of balls later picked out Newey on the mid-wicket boundary. There would be no final flourish either as Hooper bowled a canny final over and Vanuatu walked off seven down with 127 on the board.

With rain never far away, the changeover was swift and Matautaava was soon charging in down the hill and being picked off outside off stump by the recalled GH Smit, who found the square boundary. Having taken a single off the final ball Smit pulled a short ball from Nipiko behind square for four, but the acclaim of his team-matches quickly fell silent as he drove at the next ball, pitched up and homing in on the stumps, missed and was sent on his way by umpire Neil. Stokes had to wait a while to face his first delivery but was soon off the mark with a sweet cover drive off Matautaava, followed by a guided two and a pull for three. Vanuatu were quick to take the spin option with Chilia coming on for Nipiko with Guernsey having moved into the high 20s at five an over and the second-wicket pair looking confident.

Matt Stokes chips away at the required score        Guernseysportsphotography

Stokes jumped down the wicket to ease Chilia for six into the long-off fence and by the end of the eighth the Greens were well on the way to victory with 51 on the board. It seemed all too easy, but Newey went for 10, caught at extra cover. Stokes joined him soon after for 34, caught at cover as he suddenly went from cruise control to a nervous wreck against the spin of Mansale. Quite why the Greens should suddenly play so frenetically was a mystery, but it cost them. Nussbaumer edged to slip off Mansale and Hooper fell in the same over, leg before. Kimber crashed a drive to the man on the long off boundary and there was suddenly an air of panic, thankfully defused by the commendable steadiness of Ferbrache and Kirk, but also that rain.