An article in the Guernsey Press was the first mention of Caps awarded to players.

Several members of the Guernsey Cricket League sported smart new caps at the College Field on Thursday afternoon. They were awarded immediately before the GICC – GCL match by Mr FE Stroobant, president of the League. These caps have been eagerly awaited ever since the League Management Committee decided that the League should have its own official cap. It was stressed from the start that the caps would be presented on merit. It would appear that a strict qualification has not been laid down. For the time being it has been decided to award the caps to the members of the League side who have been selected to play for Guernsey next week. The players to receive them were:

WF Druce, RW Clark, RCN Roussel, CW Eley, RK Tobias, RD Self, JH Le Poidevin, BA Anthony, W Robilliard. I believe that other players will be awarded caps before the end of the season. Anthony was chosen as a reserve for the inter-insular match but will play because Roussel is not available. Anthony’s innings for the League against the Club certainly justified him playing next week.

The odds are on a Jersey victory next week. They appear to have a stronger all-round team. But it should not be forgotten that Guernsey normally plays better in Jersey. Two years ago Guernsey gained a moral victory in that a few more minutes batting would certainly have brought them victory. Last year’s match, in Guernsey, was also drawn … but this time it was Jersey who looked the more likely match-winners.

It would seem that skipper Druce, who will be leading the island side for the first time, has it in mind to open the batting with left-handed Self and Clark instead of Bisson and Clark. Self certainly showed on Thursday that he can, if he wishes, ‘keep his head down’. The stroke-playing Bisson may well be worth many more runs down the list.

Only new-comers to the Guernsey side are College skipper Ian Lloyd and Tobias, and Anthony, Eley, Druce, Clark and Robilliard have played for the past three years; Self and Le Poidevin were in the side which last played in Jersey, and Bisson and McCave played last season. 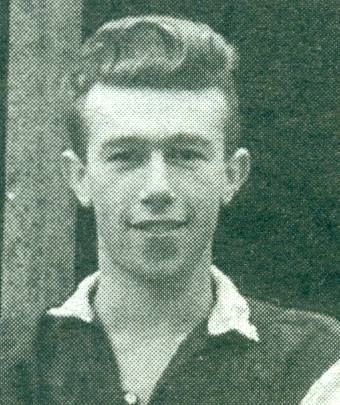 A notable absentee from the Jersey side will be Capt. RHB O’Callaghan. He scored a fine century for Jersey in last year’s match. The Jersey side is: GW Knight, P O’Brien, P Le Cras, W Blampied, G Newton, FH Le Marquand, CJ Poree, GH Hamon, R Gelsthorpe, B Ollier, D Lewis-Bowen. Reserves are R Osment and BR Le Marquand. The majority of the Guernsey side will travel by air. Because of the difficulty in arranging flights the match will start at 10.30am and will end at 5.30pm

The crowd which turned up to watch was one of the largest seen at the Field this season, over 120 at one time in the afternoon, and it is pleasant to see more interest is being taken in local representative sides in a game which but for the players has few followers.

M I Lloyd is the current Elizabeth College captain

The inter-insular cricket match played at Victoria College Field yesterday proved to be the best in the series between Jersey and Guernsey. Jersey won as expected but it was an exciting match which could so easily have gone Guernsey’s way. The official result is a two wicket victory but in actual fact Jersey had only a badly handicapped player to come in when the winning hit was made only seven minutes before the scheduled end.

Ces Poree fell awkwardly when catching out Lloyd and he fractured a finger. He was padded up and ready to bat one-handed but Jersey’s number 10 batsman scrambled home the winning hit so Poree was not required to bat. It was a match of fluctuating fortunes with the sway Jersey’s way for most of the time. They made a good start when they dismissed both the Guernsey opening batsmen with only five runs on the board.

Bisson and Lloyd faced a mammoth task. They had to get the shine off the ball and at the same time get some runs on the board. They did both and in an excellent partnership put on 84 runs. Guernsey’s lunch score of 116 for three looked very respectable, especially after that bad start. After the interval, however, wickets fell quickly and the total of 158 looked well within Jersey’s reach for the home side had just under two and a half hours to bat.

Then Self, who had been troubling the batsmen continually, struck. He had O’Brien ‘leg before’ and off the next delivery had Le Cras caught by Robilliard. This was a valuable wicket and with the free-scoring Le Cras out, Guernsey were in with a chance. Blampied joined Ollier and these two did for Jersey what Bisson and Lloyd had done for Guernsey. When they were parted, after the tea interval, the score was 110 and Jersey had time to score the remaining runs at one a minute. It seemed an easy task. But Self, struck again with another two wickets in one over. And soon the match swayed Guernsey’s way.

Knight was then trapped ‘leg before’ by Tobias and Jersey had still to score 15 runs for victory with only Le Marquand and the injured Poree to come in. Lewis-Bowen took nearly all the bowling and helped by a fielding side which was never better than average, Jersey hit the necessary runs. But it was certainly a thriller!

Jersey gained a thrilling two wicket victory in yesterday’s Inter-Insular match with Guernsey at the Victoria College Field. Set to score 159 in just under two and a half hours Jersey looked well set for victory but collapsed, and it seemed likely that Guernsey would snatch a dramatic victory. The home side recovered however and the winning hit came only seven minutes from the scheduled end.

Guernsey, who won the toss, started disastrously, losing the wickets of opening batsmen Clark and Self with only five runs on the board. Self hit a Newton delivery to mid-wicket, ran an easy single and went for a second, but there was a misunderstanding and he was easily run out at the bowler’s end. In the same over, the fourth of the innings, Clark was caught behind the wicket. Bisson and Lloyd retrieved the position however and batting admirably they pushed the score to 89 before the latter was caught and bowled by Poree. The bowler fell awkwardly in making the catch and unfortunately fractured a finger.

Bisson was dropped at first slip off the consistent bowling of Newton when he was 24 – and he made Jersey pay dearly for this. He hit some glorious boundary shots and was a little unlucky not to reach his century. At lunch, when Bisson’s score was 70, the Guernsey total stood at 116 for three wickets. After the interval wickets fell at regular intervals and Guernsey were all out for 158.

Jersey were left with about 140 minutes to score the runs necessary for victory. They started well although many of their early shots were a trifle ‘edgy’. Both opening batsmen were missed in the slips. They put on 37 at about a run a minute before Self, the best of Guernsey’s bowlers, got O’Brien leg before wicket. His next delivery saw wicket keeper Robilliard take a brilliant catch to dismiss Le Cras. Blampied saved the hat-trick and with Ollier took the tea-time score to 44 for two.

Ollier and Blampied took the score to over 100 and were batting very confidently. Ollier was out trying to take a big hit off Self when he had scored a half century and later in the same over Blampied was well caught at first slip by Lloyd.

Knight, the Jersey skipper, opened confidently with a four off the first delivery he received and it was he who saw Jersey into a match-winning position. Newton promised to score the necessary runs and it was when he was brilliantly stumped that Guernsey looked to have a winning chance, for with the injured Poree, Jersey had only three more good wickets. The injured player was prepared to bat one-handed but his services were not required. Self bowled really well for Guernsey and fully deserved his six wickets.

The usually high standard of fielding by the Guernsey players was missing when the inter-island match with Jersey was played in Jersey on Thursday. But for this Guernsey would probably have beaten their old rivals. This would have been a great feat for, whereas Jersey was fielding its strongest side the Guernsey XI, without such players as Robin Roussel, Neville Smith, Colin Eley and Philip Searle, could not be rated so highly.

Looking into the runs ‘given’ to Jersey by missed catches or bad fielding I estimate that roughly 30 runs could and should have been saved. At least four catches should have been taken even though none of them were easy. On the credit side Guernsey, or rather Alan Bisson and Ian Lloyd, batted very well and the total of 158 was very creditable. Lloyd also snapped up two great slip catches and wicket-keeper Bill Robilliard took a fine catch and made a superb stumping.

So, if the Guernsey team’s performance was not consistently outstanding, at least it had its highlights and these almost grasped victory. The final two-wickets victory for Jersey does not tell the true story of how close the match was. When Danny Le Marquand, the number 10 batsman, came in 15 runs were still required and only 13 minutes left for play. Le Marquand and his partner at the wicket, Dennis Lewis-Bowen, also had the knowledge that if either lost their wicket there was only Ces Poree to bat. And even taking into account the great courage of Poree, it is distinctly unlikely that he would have been able to offer much resistance for he had earlier broken a finger on his left hand.

But if Lewis-Bowen and Le Marquand were concerned with their position they certainly did not show it. One off-drive by the former ranked with any stroke of the complete day’s play … and some of Bisson’s were really top class. It was indeed unfortunate for Guernsey that Eley was prevented from travelling because of his business. His spinners may well have proved a trump card.

The concrete-hard wicket of the morning had become very dusty during Jersey’s innings. Alan Bisson was tried but failed to extract any help from the wicket. It is fairly certain that Eley would have been dangerous. Roger Self bowled excellently and kept one end going almost throughout Jersey’s innings. His variation of pace was his great asset and Jersey’s batsmen were never happy against him.

For Jersey, bowlers Newton, Le Marquand and skipper Knight did a good job. Newton and Le Marquand proved an outstanding partnership when they opened and the latter was unfortunate not to be rewarded with at least one wicket. Knight had a good late spell and was responsible for Guernsey’s after-lunch collapse. Brian Ollier and Bill Blampied were Jersey’s batting stars. Brian Ollier survived one chance early in this innings but on the whole batted very steadily.

Quite a big crowd watched the match and regular followers stated that it was, unquestionably, the best match they had seen this season. The match was likened to a ‘Muratti’ football match. This is a good thing. Those who started the current series did a good job. Before, the top match was between the sides selected by the respective island clubs and those encountered fell well below the current Guernsey-Jersey matches.